“This is hands down the best thing I’ve EVER read, and I’m old as sh*t.”

“EVERY Kickstarter creator needs to see this article.”

“If you don’t read this 2019 Kickstarter stats guide, you’re making the biggest mistake of your life.”

Ok, I came up with those quotes this morning.

But that doesn’t mean they’re not true.

No, you damn fool!

There have been 453,585 projects launched since Kickstarter was founded in 2009.

P.S. A whopping 92% of $1 million projects were in one of just three categories:

So if you want a chance at striking it rich, launch a project that fits in one of those three categories.

2. 63% of Kickstarter projects fail to reach their funding goal

Welp, these Kickstarter stats are officially making me depressed.

Which Kickstarter category has the lowest success rate?

Kickstarter Technology projects have a success rate of just 20%.

No so fast, tiny dancer.

So more of them get funded, but they bring in WAY less money.

Over the last 10 years, dance campaigns have brought in a TOTAL of $13.4 million.

3. Not a Kickstarter stat, but you look exceptionally good today

I had to do something to cheer you up.

But fear not, things are starting to look up…

4. Backers pledged $4.4 billion toward Kickstarter projects over the last 10 years 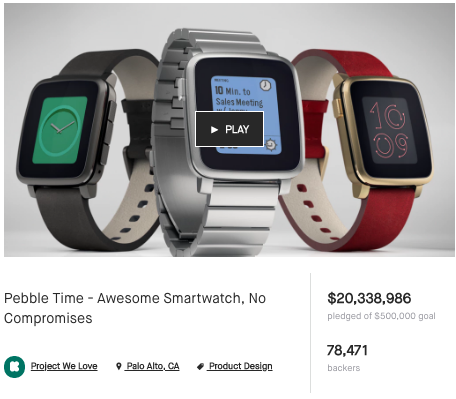 That’s almost as much as I’ve spent on gas station scratch off tickets in the last 6 months.

But it’s certainly nothing to sneeze at.

And when you factor in Kickstarter’s slow start from 2009 – 2013, things have really taken off in the last few years. 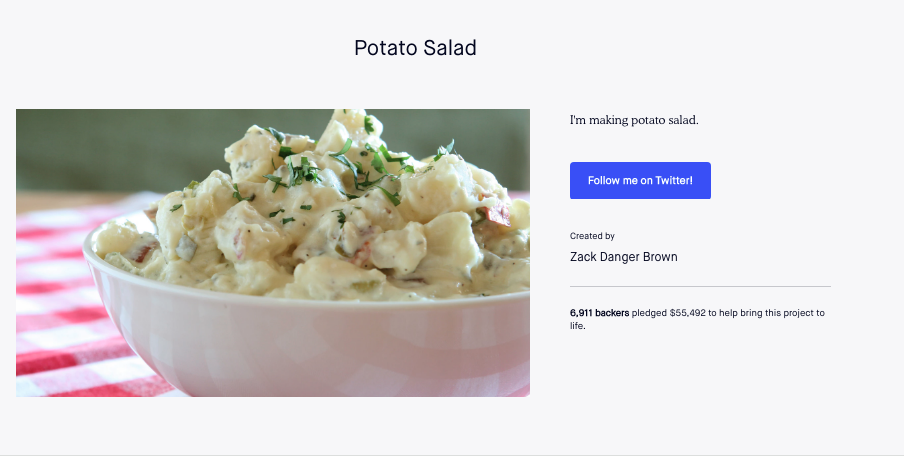 So if somebody tells you that your idea is stupid, send over that link and tell ’em…

Raising a lot of money on Kickstarter is hard.

Your product has to ball out.

And you need an exceptional amount of luck.

But you can increase your odds of Kickstarter success by reading our 11 proven Kickstarter tips for 2019.

7. 32.7% of backers supported more than one project

This is one of the most important 2019 Kickstarter stats:

5.4 million people have backed more than one Kickstarter project.

THESE ARE THE PEOPLE YOU NEED TO REACH.

Hold up, I want to make sure that sank in…

THESE ARE THE PEOPLE YOU NEED TO REACH!!!

You know what the best way to do that is?

Be a repeat creator.

That screen shot is from Travel Tripod by Peak Design, the most funded Kickstarter project of 2019.

Look at how many of their backers were returning backers.

Your odds of success SKYROCKET if you’ve already fulfilled a successful Kickstarter project.

The backers from your first campaign will be your best customers on your 2nd campaign.

Send them an email on Day 1 and watch the funds roll in, baby.

8. Your Kickstarter campaign should run for 39.7 days (according to these Kickstarter stats)

The average campaign duration for the each of the 15 most funded Kickstarter campaigns of 2019 was 39.7 days.

And a handful used the maximum of 60 days to run their campaign.

Pro Tip: If you think your campaign is going to ROCK, go with the full 60 days.

The big campaigns make tens of thousands of dollars every single day their campaign is live.

So the more days you run your campaign, the more money you’ll make.

Yes, you’ll have to spend more on advertising.

But it’s worth it.

For every good lookin’ lady, there are about a thousand different suitors going after her.

So how do you stand out?

Easy, just be better looking than everybody else.

No worries, me too.

Here’s what you gotta do if your product doesn’t look like Prince Charming:

(Stand out by being insanely creative with your campaign page and Kickstarter video.) 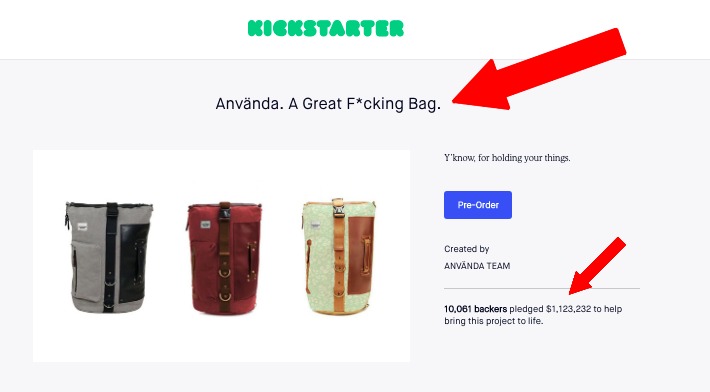 #2. Send paid traffic to your page.

(Via Facebooks ads and Kickstarter newsletters.) 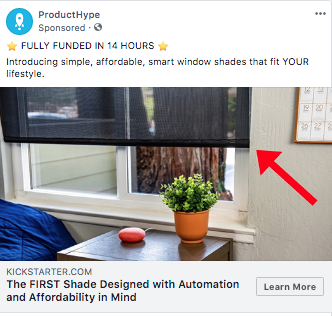 10. Kickstarter Games bring in the most money (especially in 2020) 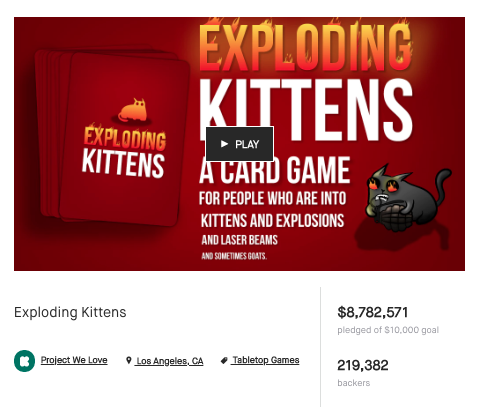 One of the most surprising Kickstarter stats in this list:

Games are Kickstarter’s most popular category in 2019.

Here’s how much each category has raised since 2009:

Then there’s a HUGE drop off before you get to #4.

Kickstarter doesn’t really care how much money they make.

11. Tuesday is the best day to launch a new Kickstarter project

Why is Tuesday the best day to launch your campaign?

Kickstarter organic traffic is at its peak.

Monday: Another solid option, but people are busy as sh*t on Mondays.

Friday: Actually a really good idea! (If you want your project to bomb.)

Saturday: Don’t even think about it.

12. Your Kickstarter campaign should have 13.7 rewards (maybe) 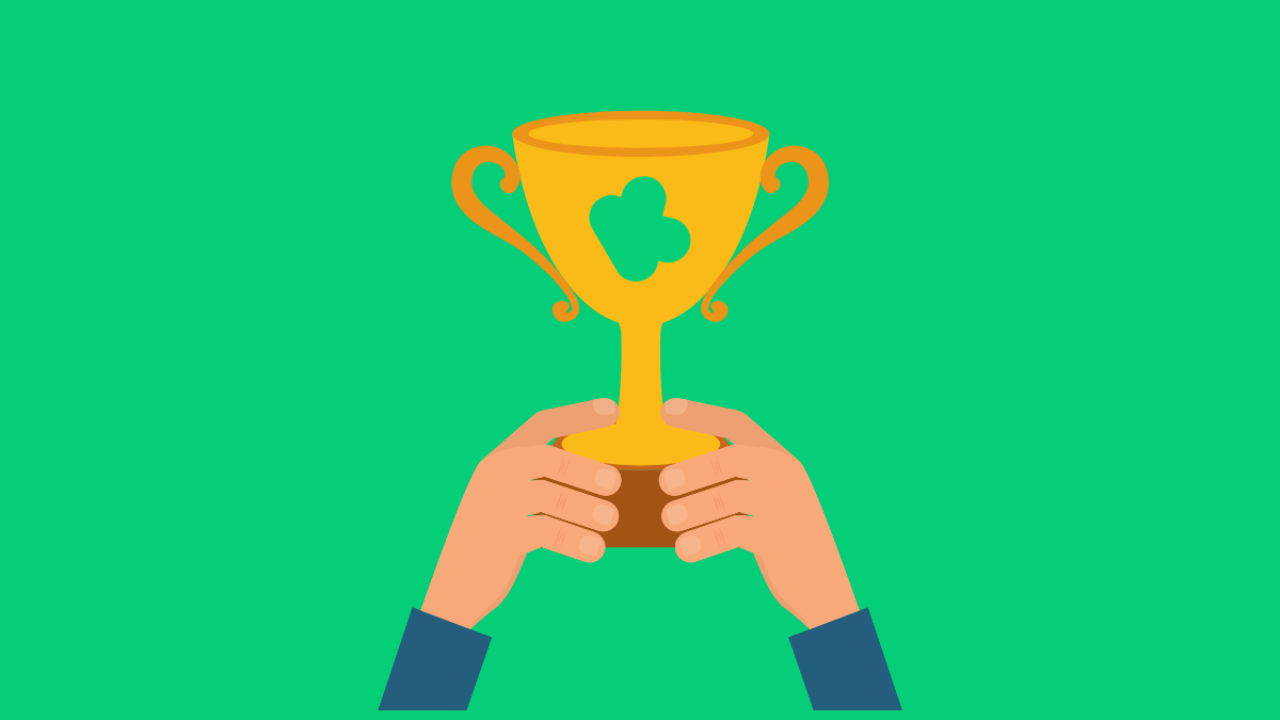 “But Grant, you’ve always said that having fewer rewards is better!!”

Yes, this is true.

And despite the numbers staring me in the face, I still tend to believe that.

The average number of rewards for each of the 15 most funded Kickstarter campaigns of 2019 was 13.7 rewards per project.

That’s definitely more than I thought it’d be.

But take that with a grain of salt…

Travel Tripod by Peak Design, the most funded Kickstarter campaign of 2019, had just two rewards.

But The Universal Law of Sales still applies:

In general, having a ton of redundant rewards confuses people, and confused people don’t buy stuff.

P.S. You SHOULD offer a $1 reward so you can collect as many email addresses as possible.

So they can turn into customers down the line.

P.P.S. You should NOT offer a $30 company branded t-shirt as a reward.

(Trust me, nobody wants that crap.)

13. Crucial Kickstarter stat: If your Kickstarter video is 4 minutes or longer, stop scrollin’ and read this

Entertaining videos can be four minutes long and do just fine.

But in most cases, your Kickstarter video should be around three minutes or less.

The average video length for each of the 15 most funded Kickstarter campaigns of 2019 was 3 minutes and 11 seconds.

And another important Kickstarter stat…

Only 20-30% of people will watch your entire video.

So get the important stuff out of the way EARLY.

Or people won’t see it.

P.S. You should read our 2019 Kickstarter video tips with 7 proven ways to increase conversions.

So if you want your product to resonate with the biggest chunk of Kickstarter’s organic audience, design it for millennial men.

“So you’re saying female-focused products don’t do well on Kickstarter?!”

It’s definitely possible to raise a boat load of money with a product that’s mostly for women.

The Kosan Go Travel Dress absolutely crushed it, for example.

But the average user browsing Kickstarter is a millennial male.

15. Kickstarter’s most popular countries may surprise you… 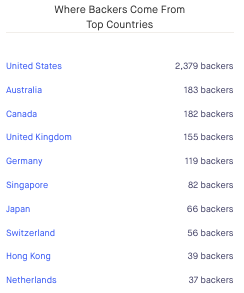 Most of your backers will come from the U.S.

But a large chunk will hail from Australia, Canada, Germany, and the U.K.

Focus your advertising budget on those five countries.

16. 12% of Kickstarter projects never get a single backer

Moms of the world…

You really dropped the ball on this one.

Creators of the world…

If not even your mom would back your Kickstarter campaign, it’s time to give yourself a long, hard look in the mirror.

(And give her a gosh darn phone call, will ya?)

17. You (yes you) have the potential to launch a Kickstarter project that changes the world

Some of these Kickstarter stats are discouraging as hell.

Having read them, you’re better prepared than 99% of other creators.

YOUR idea could change the world.

But you’re never going to find out unless you hit that launch button.

My favorite quote has nothing to do with Kickstarter stats.

But it has everything to do with making the most of your life.

“Each of our stories pivot on a single moment.

That short pause between what is, and what could be.

In a breath, we can decide between what we wish to be true…

And what we can make happen.”

So, when in doubt…

And see what happens.

(But first, give your mom a call.)

P.S. We analyzed these Kickstarter stats straight from the horse’s mouth, Kickstarter themselves.

Leave a comment or shoot us an email – [email protected]