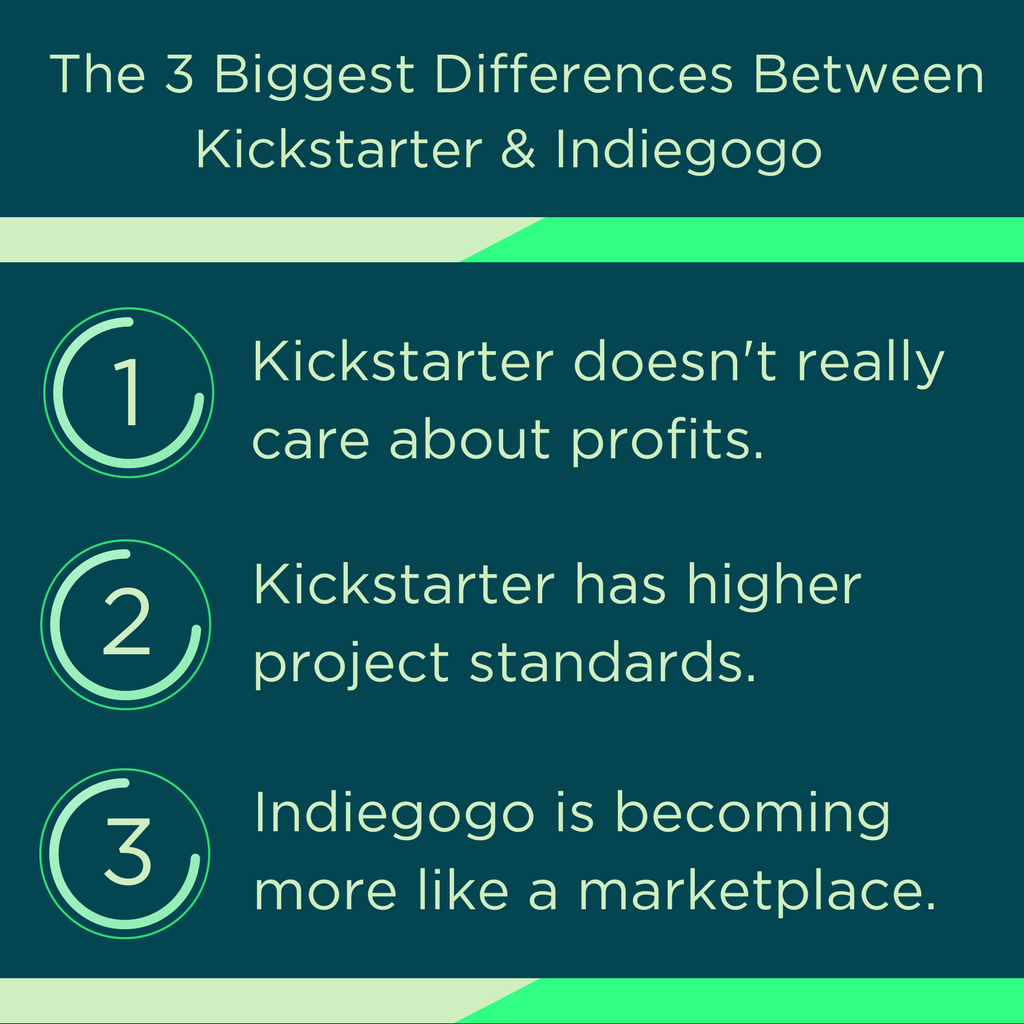 Kickstarter doesn’t care about profits?
Indiegogo has terrible projects?
And now they sell bread and milk too?

That nifty looking chart looks good and all, but it probably raises more questions than answers. Let’s break down the biggest differences between crowdfunding’s most popular platforms.

Does Kickstarter care about profits?

Ok that’s a bit of a stretch. They definitely do care about making money, but it’s not their top priority. Kickstarter is a Benefit Corporation, meaning they’re obligated to consider the social impact of their business decisions. Kickstarter’s own charter says, “(Our) mission is to help bring creative projects to life. We measure our success as a company by how well we achieve that mission, not by the size of our profits.” 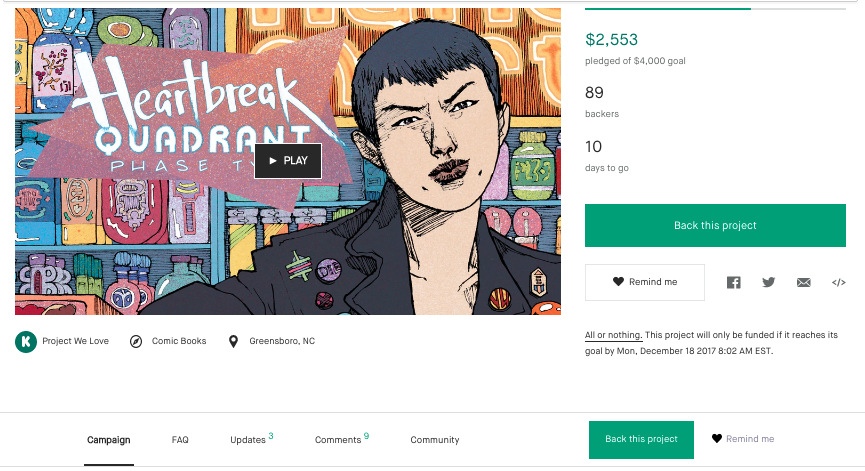 If Kickstarter cared about profits, they sure wouldn’t be featuring, “Heartbreak Quadrant,” a project that’ll be lucky to meet its $4,000 goal. Kickstarter has multiple million dollar tech campaigns running at all times, but they choose to feature this one. That says a lot.

On the flip side, Indiegogo’s homepage features are almost always products that have raised hundreds of thousands of dollars. Like this one: 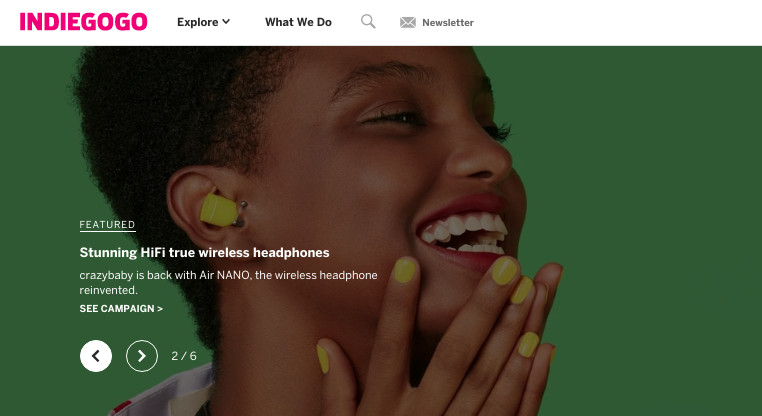 We’re not saying Indiegogo is one the bad guys. There are PLENTY of businesses who couldn’t care less about their impact on society. But Kickstarter really stands out by actually living by their mission statement.

Are there better projects on Kickstarter or Indiegogo?

Kickstarter and Indiegogo both have their fair share of awesome projects. On a percentage basis though, a higher proportion of Kickstarter’s projects are fully prepared to deliver the promised product compared to Indiegogo. That’s largely because Kickstarter has more demanding rules that creators must meet before launching their campaign. Namely, all Kickstarter projects involving products must feature a fully-functional prototype – a requirement absent from some Indiegogo projects. 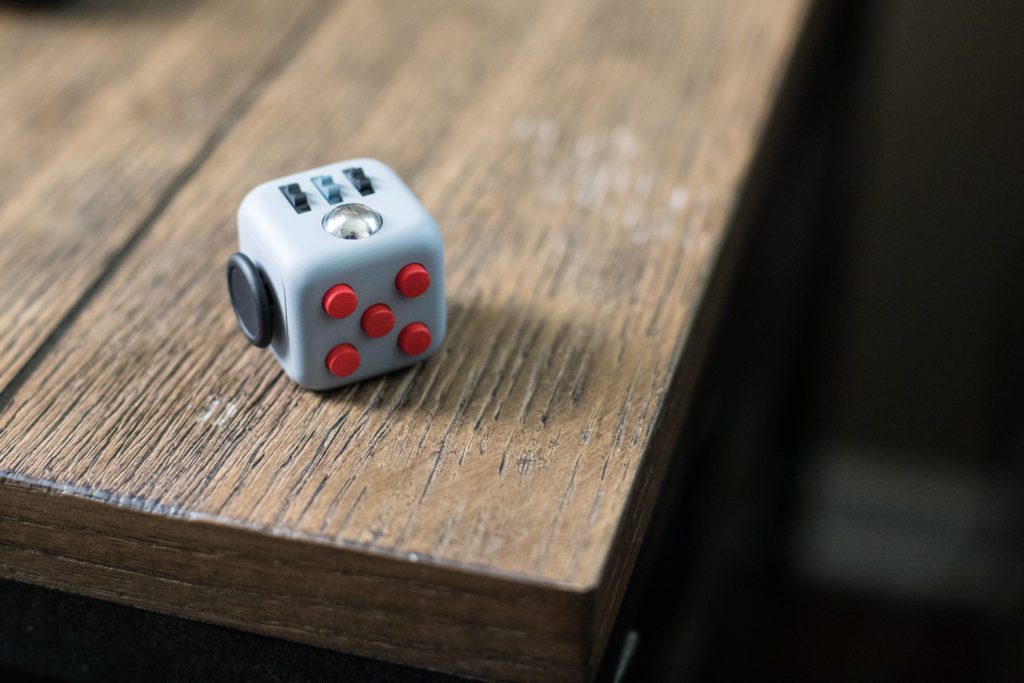 Some of the most popular Indiegogo projects don’t feature a full, working prototype. In these cases, creators hope to use the money raised from crowdfunding to help develop a prototype, and eventually, the final product. So you’ll find some really cool ideas on Indiegogo, but creators may still be a little far off from actually making the product.

But at the end of the day, that very strategy is what crowdfunding’s really about – getting thousands of regular people to think your idea is so cool that they give you real money to help it come to life.

What is the Indiegogo Marketplace?

3. Indiegogo is becoming more of a marketplace.

Indiegogo does a nice job of explaining its Marketplace here. Essentially what they’re trying to do is build out a branch of their business that doesn’t necessarily have to do with crowdfunding. In order to be featured in the Indiegogo Marketplace, a product must be ready to ship. That’s a key distinction from most crowdfunding campaigns where it’s often several months before backers receive a product.

If you’re familiar with crowdfunding, you may be thinking to yourself, “Well, that sounds a lot like InDemand.” And you’d be right. Marketplace is definitely similar to Indiegogo Indemand, with two key distinctions.

Indiegogo is trying to create a longer, more natural lifecycle for crowdfunding campaigns. One where they go from a live campaign to InDemand before finishing in the Marketplace.

Kickstarter, for now at least, has shown no interest in hosting any kind of E-commerce option that doesn’t involve live crowdfunding campaigns. 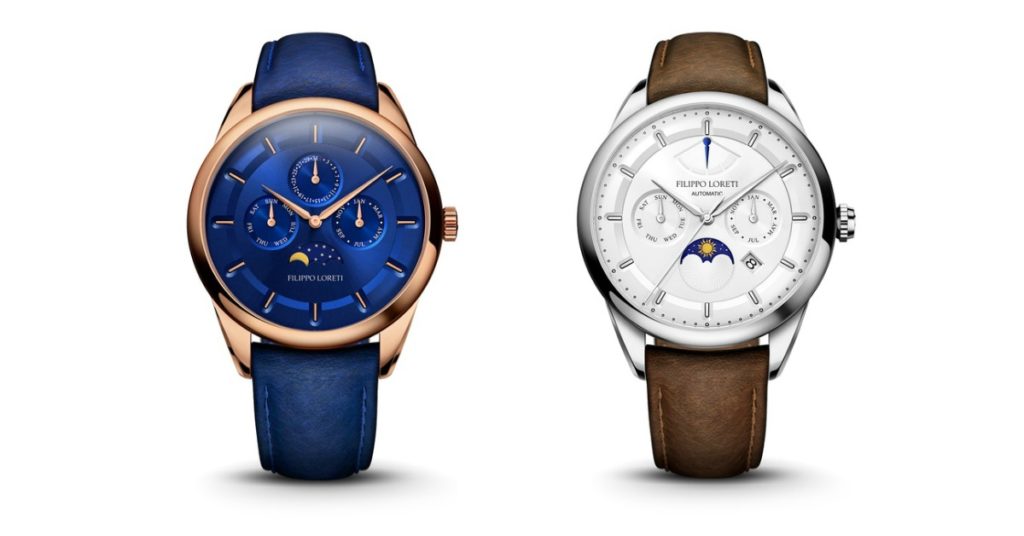 If you’re interested in learning more about the ins and outs of crowdfunding, and don’t have hours to spend researching, check out our fun & simple guide to crowdfunding.